The Nuns Host Tibetan New Year: the Year of the Iron Mouse Begins

This year’s Tibetan Losar celebrations —the Year of the Male Iron Mouse —fall half-way through the Arya Kshema Winter Dharma Gathering, so they are being hosted by the nuns and sponsored by Tergar Monastery, Kagyu Monlam and Tsurphu Labrang, over the traditional three days.

On a bright spring morning, fresh after heavy overnight rain, people gathered in Tergar Monastery shrine hall in a meditative yet festive mood for the first day of celebrations. In the flower-decorated shrine hall, traditional Losar offerings of fruit, nuts, sweets and kapsey were piled high in front of the image of His Holiness the 17th Gyalwang Karmapa. As the congregation arrived, friends greeted each other joyfully with Losar Tashi Deleks and other New Year’s greetings. All the laypeople were dressed in their best clothes, the women in beautiful chubas and aprons, and the men in brocade-edged Tibetan shirts and knee-length, wrap-around chubas, tied at the waist with a colourful sash.

Drupon Dechen Rinpoche presided over the event. Over the past few years, from Monlam to Monlam, the public have watched this playful, young monk grow into a serious young lama, and now, having attained the age of majority last week, Rinpoche has been given more responsibilities, especially for organising and supervising this annual gathering for Kagyu nuns.

The morning ceremony began at 7.00am. Rinpoche first prostrated, then led a ku-sung-thug mandala offering to the Gyalwang Karmapa and the special Losar prayers, which were compiled by His Holiness the 17th Karmapa for the Garchen Losar.

The nuns offered delicious sweet rice to all guests, a traditional dish at all Tibetan celebrations and important ceremonies, and Tibetan butter tea. They also served a spicy vegetable dish and freshly baked bread. After the prayers, it was time to offer kataks to the thrones of the 16th Karmapa,Rangjung Rigpe Dorje and the 17th Karmapa, Orgyen Trinley Dorje, and to Drupon Dechen Rinpoche. Finally, everyone received a small mesh take-away bag containing Losar kapsey, two packs of biscuits, a pomegranate, and some sweets.

Meanwhile, at the Monlam Pavillion, a great Losar feast was being prepared by the nuns. More than eight different dishes were on offer, catering for all tastes, and a dessert of creamy yoghurt and freshly chopped fruit or fresh apples. Many people commented on the graceful, thoughtful way in which the nuns served their guests and looked after them throughout the meal.

On the central stage, tables were set for lamas, khenpos, staff and other esteemed guests, while nuns, monks, lay practitioners and visitors sat on mattresses on the main floor, picnic style. The two large Monlam screens played Tibetan music videos and entrancing footage of the Gyalwang Karmapa’s extensive activities which had taken place over recent years.

The afternoon was filled with games like tombola and badminton; small children and dogs raced round the pavillion, people sat chatting, and the elderly relaxed on cushions. The massive, hangar-like, metal structure of Kagyu Monlam Pavilion echoed with laughter and the excitement of the tombola, while music played continuously late into the afternoon. A number of guests (Tibetan and foreign) danced together in what could only be described as free-styling while the dinner preparations were under-way.

Then dinner was ready and another community meal was served. Following dinner, joyful activities were resumed with the distinctive movements of traditional Tibetan round dances. Laughter and games continued with even greater intensity than earlier, and it seemed a magnificent and delightful way to greet the Male Iron Mouse Year.

(Click on the image below to view slideshow/photo album) 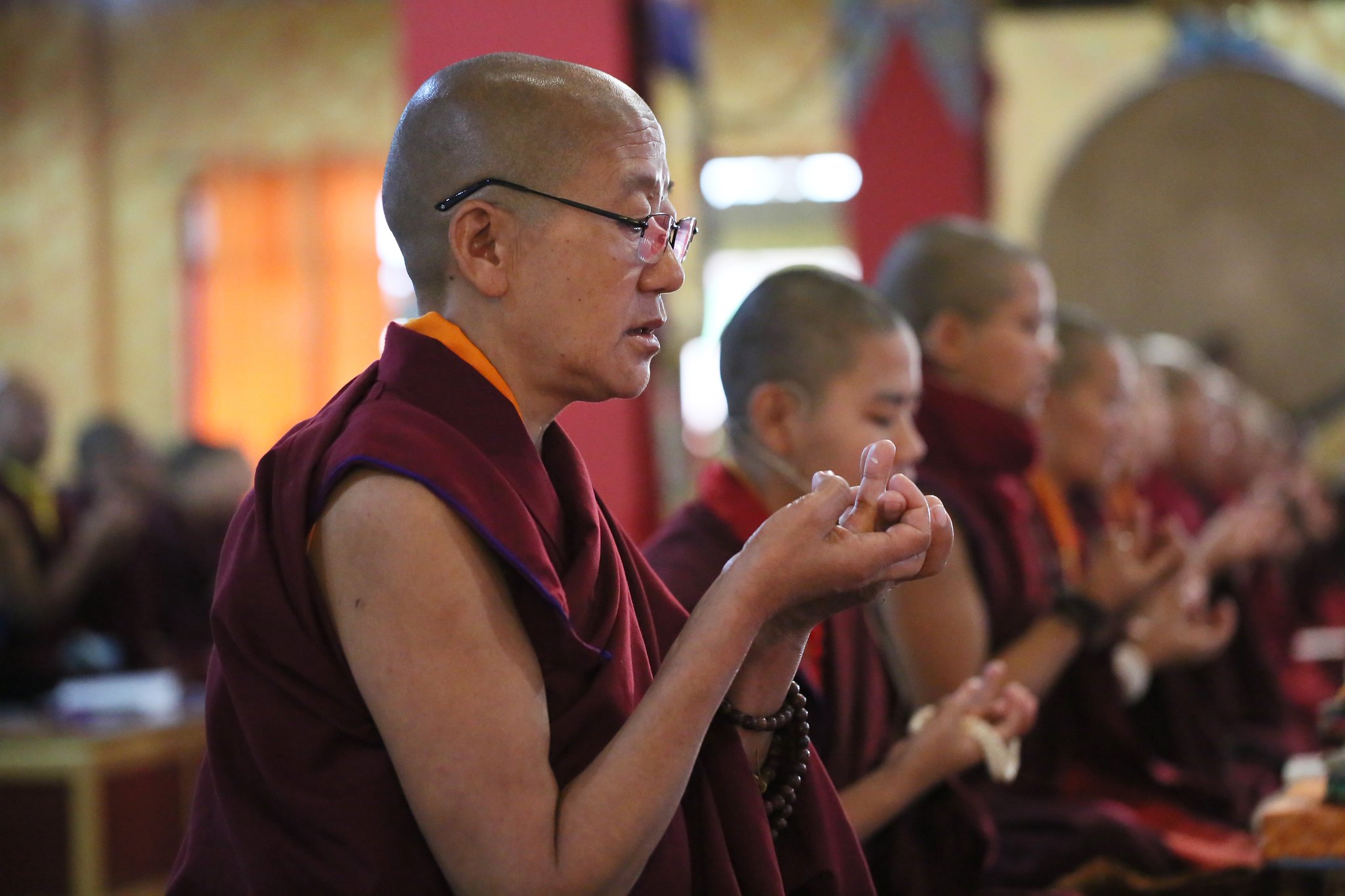